Commercials are the most knowledgeable participants of futures markets, since they are the producers/processors of physical or major hedgers of financial commodities. Their dynamic repositioning often leads to major or interim market tops/bottoms.

Here is an example in Oats. See how the drastic Commercial selling precluded the big drop: 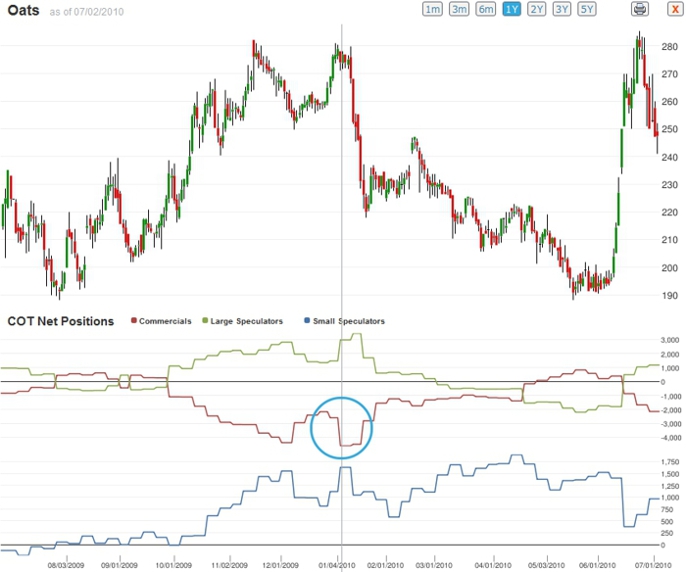 Here is another nice one in Japanese Yen: 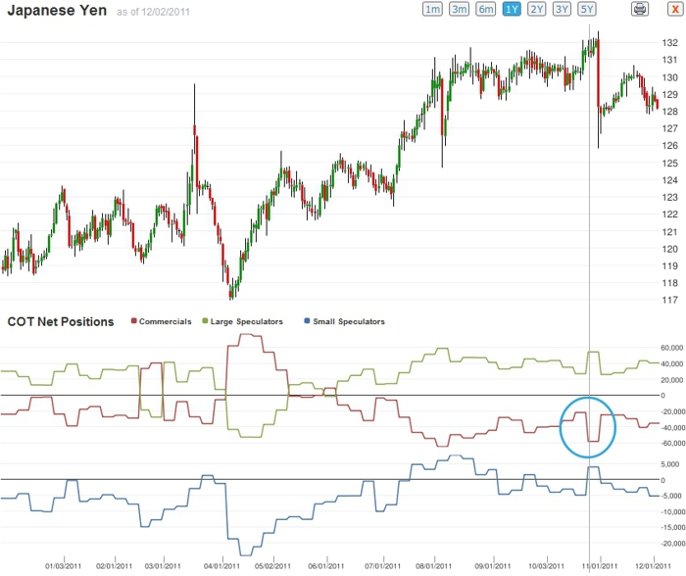 Large Speculators typically move inversely with Commercials, since these traders are large enough to offset the price hedging requirement of Commercials. During trends, Large Speculators are generally on the right side of the market, but near peaks and bottoms, they tend to become overextended. COT data nicely supports the old trading maxim: If there are no buyers/sellers left, prices cannot increase/decrease further and will start to drop/rise.

Here is an example in Canadian Dollar. Check out how nicely the green line suggests the major trend, whenever it is above 0, prices climb, and as it declines below it, prices start to fall for months: 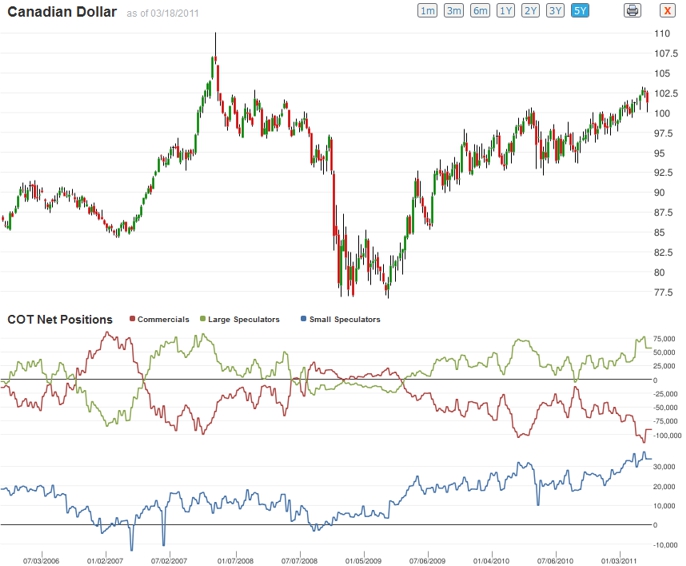 Small Speculators generally move together with Large Speculators, BUT not always! These traders, officially termed "Non-Reportables" are generally the weakest holders of positions, so it is essential to keep track of them. This is the reason why at COTbase we show these traders on a separate chart - their movements could not be tracked precisely if tracked on the same scaled chart we show the large traders. On most markets they are extremely good contrarian indicators, especially for short trades. Whenever they are in "hype mode", they are prone to overposition themselves, and since their accounts are small, margin calls can come easily after relatively smaller price drops, triggering sells, that may well start a new down leg.

Here is an example in Gold. Check out how the extreme positioning of Small Speculator longs precede a 13% price decline: 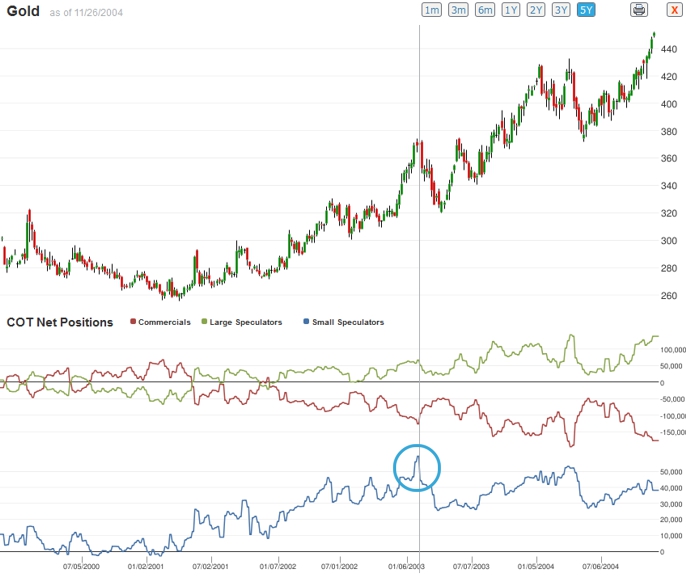 Here is an interesting example in Live Cattle. Since farms are relatively small, many farmers (ie. the Commercials on this market) are classified as Small Speculators. So on these markets, Small Speculators are often the smart money!: 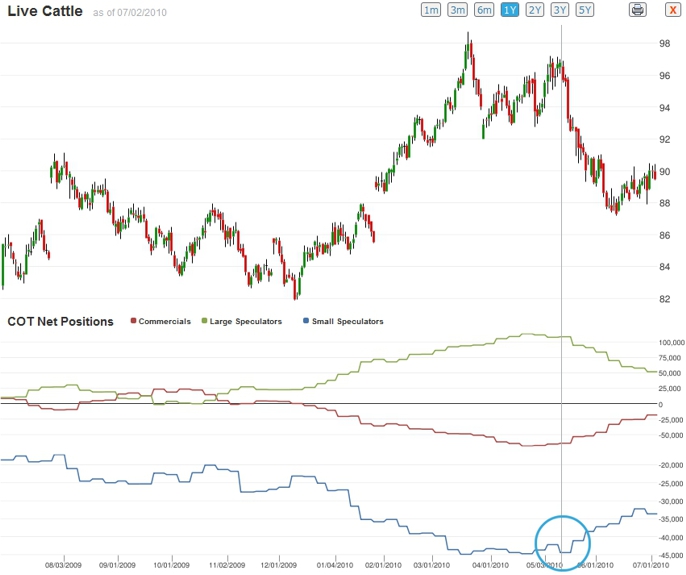 Commercials hedge the most when they believe that the actual price is very favorable for them to hedge their future production. While they have an information advantage, they still cannot know the future. Sometimes, major shifts occur, that forces Commercials to unwind their hedge positions. Since they generally have deep pockets, their stress barrier is high, but not absolute. As the losses grow to critical levels on their trading accounts, they have to liquidate: buy back short contracts or sell the longs. These trades further fuel the steep price moves that caused the unfavorable situation, so the positive feedback loop leads to parabolic price rises.

Here is a recent example in Cotton. Check out how the rally gets hot as the price exceeds the high that corresponded with the extreme Commercial hedging activity: 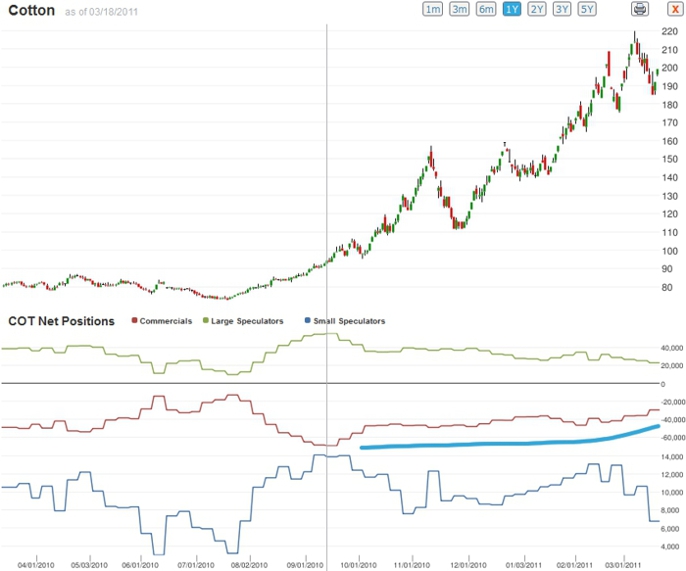 And two nice examples on one chart, in Coffee: 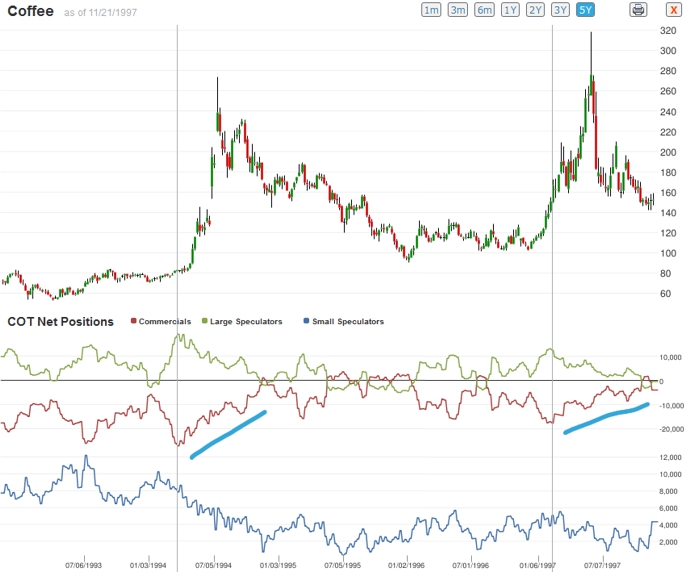 Subscribe now to take advantage of these invaluable signals!